On the heels of a one-sided KO performance over former WBA regular champion Lucas Matthysse, the newly crowned champion took to Twitter and declared himself a free agent. 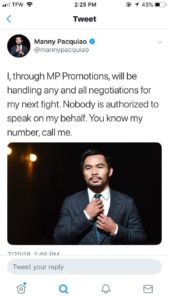 This should come as no surprise. Pacquiao has maintained that he was no longer using the services of long time promoter Bob Arum and Top Rank. Interesting enough is that Eddie Hearn has come and stated that if Pacquiao is indeed a free agent, he would talk to him about fighting on the newly created DAZN streaming service.

Earlier in the week Hearn announced several American-based fighters he signed to Matchroom Promotions USA. The name included were Demetrius Andrade, Jessie Vargas and Jarrell “Big Baby” Miller among others.

While those are some solid names, it isn’t the marquee name Hearn has promised to get when he first announced his deal with DAZN. If he’s able to lure Manny to DAZN that would be just the NAME he was looking for. Prime or no prime, Pacquiao is still a big draw.

3kingsboxing will monitor the situation and keep you updated as more information comes available.

Whyte vs Browne To Air Live On HBO

HBO picks up American rights to heavyweight bout  Looks like A heavyweight showdown is coming to American TV as HBO just picked up Dillian Whyte vs Lucas Browne, coverage will begin at noon EST. The […]

Thurman: “A Lot of Us Are More Flexible Than Terence Crawford”

Keith Thurman: You want us to focus on one guy? Former unified welterweight champion Keith Thurman (29-1, 22KOs) was challenged on why he and his fellow PBC welterweight counterparts have yet to step in the […]