A planned fight for Adonis Stevenson to fight either Eleider Alvarez or Badou Jack has been postponed. Stevenson was set to face either his mandatory or the former WBA champion on January 27th on Showtime but the network and PBC have asked his promoter Yvon Michel, GYM, to reschedule due to a conflict with another event.

The “other” event is likely Mikey Garcia vs Robert Easter Jr as we reported earlier. It’s simply a “bigger” fight everywhere but in Canada. Garcia was half of Showtime Boxing’s most watched non PPV event of the past couple of years when he beat Adrien Broner earlier this year.
While rumors have been abound that Stevenson’s mandatory, of two years, Alvarez would accept step-aside money for the fight between Stevenson and Jack to take place, Michel said that is simply not true; 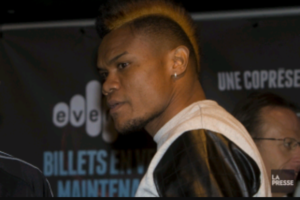 “There will be absolutely nothing without Eleider agreeing to it. I am submitting offers to Stéphane Lépine (the manager of Alvarez) this weekend. Now, as the promoter of Eleider, I will explain the offers to him, but I would recommend what is best for the whole of his career, not just for one fight. But whatever offer Alvarez chooses, I will support him 100 percent,” Michel said.

“Ultimately, what I want, are the best deals for my two boxers. That’s what I’ll make sure to get them.”

Hogan Up to be WBO Mandatory for Munguia

Chantelle Cameron: “My Goal is to Unify the Division…”