Top Rank announced last month that WBO featherweight champion Oscar Valdez would return to the ring in March. Earlier this evening 3KingsBoxing.com learned that his opponent will be Scott Quigg. 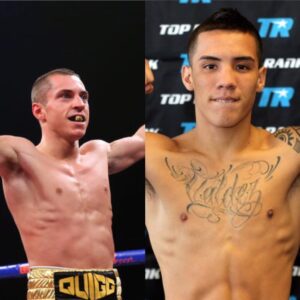 The fight is to take place on March 10 and likely to be televised by ESPN. According to a source with knowledge of the negotiations the venue is expected to be StubHub in Los Angeles.

Quigg’s promoter Eddie Hearn said earlier today during a media call that the deal was close.

“Hopefully we get it over the line – an unbelievable fight. We are close to finalizing a deal,” said Hearn.

Quigg underwent surgery on his jaw after the only defeat of his 37-fight career at the hands of Carl Frampton. Earlier this year he moved to California to begin working with Hall of Fame trainer Freddie Roach. He has won three in a row since the loss to Frampton.

Valdez (23-0 19KO), 27, has defended his WBO title twice and most recently against Genesis Servania. Valdez beat Servania, who came into the fight undefeated, by unanimous decision.

Carroll: “I’m Going to Be Smart In This Fight”

Oscar Valdez Return In the Works for January 12