After Daniel Jacobs beat Luis Arias this past Saturday he said that he would attend next month’s WBO Middleweight title fight between Billy Joe Saunders and David Lemieux in Canada. Jacobs said he intends to challenge the winner to be his next opponent. 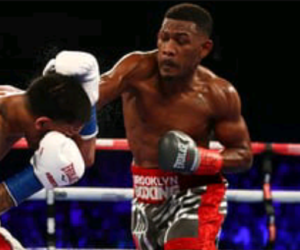 Earlier today Saunders, the current WBO Champion, told Sky Sports he has no problem whatsoever with fighting Jacobs next in America or the UK.

“We all have a laugh and a joke and call out, but if a man gets in front of my face and starts to give it the big un, then it could come to blows. Who knows? He doesn’t need to challenge me, because put the right deal in front of me and I’ll take it. No problem,” Saunders told Sky Sports.

“I’ll go to New York or we’ll do it in England. His promoter now, Eddie Hearn, is obviously British-based so we can do it here if it makes sense, or if it makes more sense, we can do it in America. I’m not bothered where we do it.”

“I congratulated him on his win and I look forward to the bigger test. If he’s the biggest test I can get then so be it. We’ll most definitely get it on, and try and get a crack at one of the big uns next. That’s the goal.”

Saunders echoed the same sentiment as Arias did prior to his loss to Jacobs. The UK native believes that Jacobs is “overhyped” and receives too much credit for going the distance with Gennady Golovkin back in March.

“People go on about his fight with Golovkin,” said Saunders. “Okay, it was an extremely good loss. Not an ugly win and get through, or a terrific win.”

“They are overhyping that terrific loss and comparing it to other fighters. You can’t be doing that. To be the best, you have to beat the best. He went up against the best and he came short.”

Hearn is willing to work with Mayweather for Tank  As previously reported by 3KingsBoxing.com, WBA superfeather weight titlist Gervonta “Tank” Davis, could be appearing on DAZN. Eddie Hearn has stated he fully understands that Davis […]

Fury on Wilder: “I Felt the Power, It Ain’t So Bad”

Tyson Fury Changes Story on Wilder’s Power With just one week to go, the boxing world is buzzing in anticipation of the rematch between WBC world heavyweight champion Deontay “Bronze Bomber” Wilder (42-0-1, 41 KO’s) […]

Gonzalez: “He’s Got to Earn the Respect”

Joet Gonzalez Humble, But Still Surly After Loss Joet Gonzalez (23-1, 14KO’s) went to the ring on Saturday October 26 with a great many things on his mind. He was focused on maintaining his undefeated […]