“A Look Back”: A Historic Night At The Mirage

Holyfield vs Bowe I 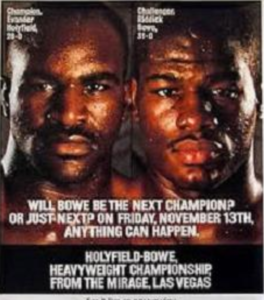 Analyst Larry Merchant, presciently foreshadowed the fight when, as the two men stood in their respective corners before the opening bell, he observed on the fight broadcast that, “The conventional wisdom is that Holyfield will try to fight the big Bowe the way he did George and Buster Douglas: staying outside, jumping in with quick combinations. But sooner or later, a fight is going to break out here.”

It broke out sooner rather than later. Holyfield, for all his skills, rarely chose any other way. Although appearing dwarfed by his foe, he willingly stepped inside and traded, and Bowe — despite some question marks going in about his appetite for combat — was more than happy to respond in kind.

After the first nine rounds the fight was pretty competitive without it being extremely close. Bowe seemed to have the upper hand through most of the rounds due to him making good use of his extra range and leverage. Holyfield’s right eye was swollen almost shut, his left eye was cut, and the title seemed to be slipping away. Then in the 10th, Bowe unwound a right uppercut that snapped back Holyfield’s head and sent him staggering backward. Sensing a possible finish could be in store, Bowe attacked, a left hook sending Holyfield drunkenly into a corner. Bowe battered him across the ring, but Holyfield kept himself upright. Then suddenly his legs looked steadier, some bounced returned in his feet, and now the man known as “The Real Deal” was the one throwing punches, finding his target with vicious left hooks and haymaker rights as his challenger looked spent.

Holyfield finally went down in the 11th, but even then he refused to yield as Jim Lampley said it would “seem like a miracle” if he were to finish, he battled to the last second of the 12th. In many ways, he showed more in that first defeat of his career than he had in his previous wins.

In what would become one of the greatest heavyweight boxing matches of all time, Bowe defeated Holyfield by unanimous decision, winning all three judge’s scorecards by scores of 117–110, 117–110 and 115–112. The final punchstat numbers provided by Compubox were: 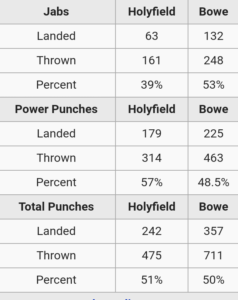 The match was critically acclaimed, winning The Ring magazine’s Fight of the Year with round 10 of the fight also winning the magazine’s Round of the Year. Only a month later, Bowe would vacate his WBC Heavyweight Championship after refusing to fight number one contender Lennox Lewis after the two sides coundn’t agree on a split for the fight’s $32 million purse. He would keep his WBA and IBF Heavyweight titles, however, and would successfully defend them in easy victories against Michael Dokes and Jesse Ferguson. After much anticipation, Bowe and Holyfield would meet in a rematch on November 6, 1993 for Bowe’s Heavyweight championship. The duo again went 12 rounds with Holyfield earning the victory via majority decision.

There was no way for us to know it at the time but that night in Las Vegas 25 years ago would prove to be the high-water mark of Bowe’s career. For Holyfield, there would be many more glorious nights ahead of him in what proved to be one of the greatest career’s in modern heavyweight history.

Happy Birthday Champ! I done wrestled with an alligator, I done […]

The Rise And Fall: Ike “The President” Ibeabuchi

Where Are They Now Presents: Ike Ibeabuchi – A Legend For […]