However, there was of course, one name missing from this list and with good reason. WBC champion David “El Bandera Roja” Benavidez (22-0, 19ko). Besides the fact that Benavidez suffered an injury that canceled a fight with mandatory challenger Avni Yildirim, he is still looking to return in April.

Plant dropped a bombshell on Instagram revealing that it is team Benavidez that is the reason for the hold up on the bout. 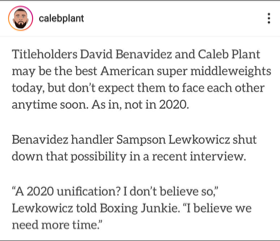 The WBC champion followed it up with a hard-hitting statement and even suggested wanting to fight the very man who he recently turned down to fight (Canelo Alvarez), for the traditional September date.

By now, we all know how this goes. It isn’t different than any other social media beef and the hits just keep on rolling, The prideful WBC champion immediately responded and made it clear he is ready to go at anytime, all that is needed is an offer.

These two champions need to get it on to finally settle their ongoing beef in the ring hopefully it does take place before 2020 comes to a close.

Featured Article: Wilder to Fury: “When I Found You, You Were Strung Out On Coke!”

Premier Boxing Champions issues statement to fans The growing concerns about the epidemic COVID-19 have been crippling the sport of boxing. As every major event is cancelled on the daily, it seems that the entire […]