On the undercard of Top Rank on ESPN from the Grand Sierra Resort & Casino in Reno, Nevada, Shakur Stevenson improved to 5-0 with 2KOs with a unanimous decision (80-72 3x) over Juan Tapia (8-2,3KOs). It was target practice for Stevenson as Tapia didn’t seemed to eager to want to trade and spent most of the night backing up against the ropes. Stevenson showed a good jab throughout the whole fight.

Stevenson hit Tapia with some big shots and put in some good work to the body. Tapia simply didn’t let his hands go enough. He tried to box with Stevenson, a strategy that was all wrong. It almost seemed like Tapia was trying to lure Stevenson into a mistake that never came. It was a good experience for Stevenson as this was his first 8 rd. fight and he was able to get some good rounds in. We shall see what’s next for the prospect. 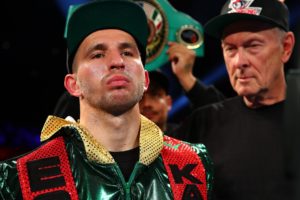 The second televised fight was a 10 round welterweight bout in which Egidijus Kavaliauskas improved to 19-0 with 16 KOs with a TKO victory over David Avanesyan. Kavaliauskas controlled the pace of the fight with his jab, as Avanesyan came forward he would take a step back and land his jab. In the third round Kavaliauskas hurt Avanesyan with a short left hook. Avanesyan kept lunging forward leaving himself open throughout the fight.

The fifth was more of the same, Kavaliauskas showing patience catching his opponent coming in. In the sixth he hurt and dropped Avanesyan, shortly after that he would make the referee stop the fight as Avanesyan never seemed to recover. After the fight Kavaliauskas said he would like to fight Terrence “Bud” Crawford after he beats Jeff Horn. It was a good showing for Kavaliauskas who showed patience and power getting Avanesyan out of the way.

Lomachenko Gets Ready for Unification Opportunity

Lomachenko speaks on his bout with Jose Pedraza! OXNARD, Calif. (Oct 23, 2018) – WBA lightweight world champion Vasiliy Lomachenko was at home at the Boxing Laboratory as he prepared for his next challenge. Lomachenko […]

Top Rank & MTK Global Have Big Plans For the Future