Showtime does almost 700K as ESPN clears a million

This weekend Mikey Garcia defeated Sergey Lipinets to become the IBF Super Lightweight Champion. The fight took place on Showtime and the ratings are in. 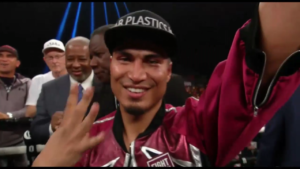 Garcia vs Lipinets peaked at 689K and averaged about 618K households that watched the fight. In contrast to Garcia vs Broner which peaked at 937K and averaged 881K proving the popularity of your opponent truly matters as well.

Top Rank and ESPN had their own card and according to the numbers it was a complete success. Oscar Valdez and Scott Quigg were involved in a all out brawl in the ring.

Valdez vs Quigg peaked at a little over 1.1M and averaged 1.08M households. It was the most watched Top Rank event of the year. It’s also ranked in the top 2 most watched boxing events this year behind only Deontay Wilder vs Luis Ortiz on Showtime.

Before fans get all caught up in the numbers it’s important to mention that ESPN has a much bigger subscriber base. It’s simply more eyes available for a fight to be seen on ESPN.

As a fan of course I don’t care who has the higher numbers I’m simply going to watch good fights period.

Bob Arum on Mikey Garcia: “His Financial Demands Are Ludicrous!”