Anthony Joshua Tweets For The First Time Since Scandal

Yesterday we were told by a spokesperson for Team Joshua that his account was “reportedly” hacked;

“It would appear that his Instagram has been compromised. Chambers is not even on AJ’s radar so we are looking in to how this has happened and who is responsible.” the spokesperson told 3 Kings Boxing.

“Sadly this is not the first time it has happened and no doubt will not be the last.“

“This will now be looked in to fully internally.“

Joshua tweeted a picture of him and some friends watching fireworks from Dubai (actual tweet with link below). Of course the Twittersphere went crazy with replies and none to nice (click on Tweet to read replies).

Former heavyweight champion Tyson Fury got involved yesterday as well (picture below). Chambers was a former sparring partner for Fury. 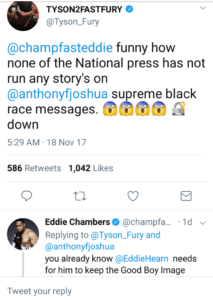 To this old scribe it is all a bit perplexing in that it doesn’t make much sense either way. If he was “hacked” as his team says then why go after Chambers? But on the other hand if it was him, why go after Chambers? It’s a question that needs an answer and no comment or “my account was hacked” just don’t cut it…..

Hearn is willing to work with Mayweather for Tank  As previously reported by 3KingsBoxing.com, WBA superfeather weight titlist Gervonta “Tank” Davis, could be appearing on DAZN. Eddie Hearn has stated he fully understands that Davis […]

Shields on Ali Bashir Assault: “I Don’t Condone Stuff Like That!”