By now most are familiar with the situation surrounding the Canelo Alvarez vs Gennady Golovkin rematch and it’s probability of it being cancelled. According to the evidence presented to the media so far it’s pretty much a forgone conclusion that the bout will be cancelled.

3KingsBoxing.com has been told by people close to the developments that Golovkin’s team has begun searching for possible replacements for the May 5th date at T-Mobile Arena in Las Vegas.

A couple of names mentioned that could be inserted in the place of Alvarez are Mexico’s undefeated prospect Jamie Munguia and as well as Gary “Spike” O’Sullivan. Munguia was also mentioned by ESPN’s Dan Rafael during his live chat earlier today. O’Sullivan was scheduled to fight in Las Vegas on May 4th. Both guys have associations with Golden Boy and they would likely simplify the transition. 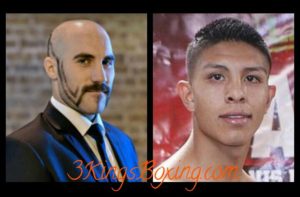 Golovkin and his team have maintained that they wish to fight on May 5th no matter who the opponent may be. There’s a long list of issues with finding a replacement this late of course from actual time to budgeting and many more.

Several guys, such as Demetrius Andrade and Sergiy Derevyanchenko, have come out publicly saying they would be interested in stepping up to the challenge. Before everybody goes running rampant on social media saying Golovkin didn’t want to face either of those guys remember there’s more invested here than just team Golovkin.

The logistics of any replacement would have to be not only approved by team Golovkin but also likely Golden Boy as they’ve invested quite a bit of money in this date and promotion already. If possible they would like for the opponent to be one of their fighters so they can have the chance to recuperate some of their respective losses.

Liam Williams: “I can outbox and outfight Heffron…”