The year 2017 has been great for boxing. We as fans have gotten the matchups we wanted as well as a circus that we really never even desired. So when it was announced that Vasyl Lomachenko will be facing Guillermo Rigondeaux boxing purist were acting like kids at the candy shop. Arguably the two purist boxers in the sport will finally meet. It’s a matchup that most have dreamed of for quite some time.

On December 9th Christmas will come early for the die hard boxing fan. The fight will take place at the Theater in Madison Square Garden, and the event sold out fairly quickly. For most of us it will be the place to be. Thinking of the many ways this fight can play out puts a smile on this writer’s face, thinking about how this year will end with what some have dub The World Cup of Boxing. 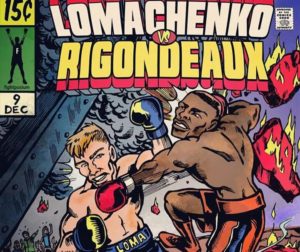 Two 2x Olympic gold medalists meeting in the ring, setting in motion what should be the sweet science of the sport on the center stage. Thinking of the angles and how traps will be set will be like watching a game of chess being played at highest level. Both fighters show a ring IQ that is very superb, one uses your aggression against you while the other uses his athleticism, angles and offense. Both have excellent footwork and technique, no wasted movement, and know how to move and stay in range.

Personally, I can think of many ways this fight can play out. I have gone back and forth in my own head, my mind says the young warrior but my heart says the old lion! So what we should do is enjoy the show and root for it because boxing needs it. As fans we asked for it and we should give respect to both men for giving us what we want! Whoever comes out on top should get full credit, they deserve it and so does the loser because they are both are giving us what our boxing hearts have always yearned for, the best vs best, what more can I say other than, Get ready for The World Cup of Boxing!

Canelo Looks To May Have Gotten A Return Opponent In Jacobs

JoJo Diaz is Ready! Tevin Farmer is Not!

Tevin Farmer and JoJo Diaz: All typing! No fighting! A fight […]